Everything Worthwhile Is Uphill 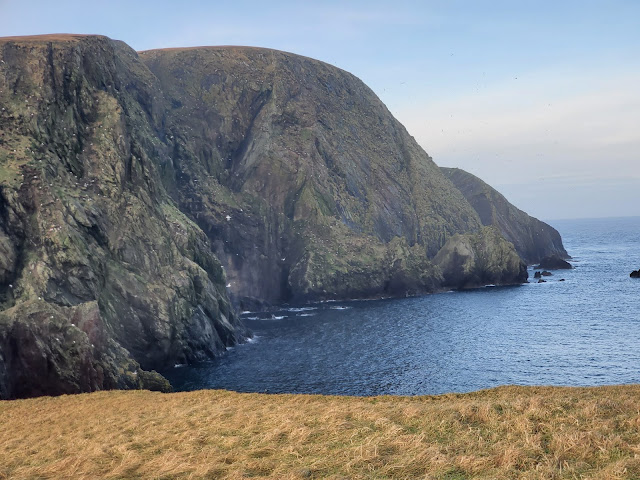 The word “genius” in the modern sense, after all, originates in the Latin phrase genius loci — “the spirit of a place.  So Fair Isle is/has  a genius! It's a great place to get lost.Huh?

The question then is how to get lost. Never to get lost is not to live, not to know how to get lost brings you to destruction, and somewhere in the terra incognita in between lies a life of discovery.

There is a quote all who wander are not lost- but The things we want are life-changing and we don’t know or only think we know what is on the other side of that change… Never to get lost is not to live. Leave the door open for the unknown, the door into the dark. That’s where the most important things come from, where you yourself came from, and where you will go.

An adventure is nothing more than bad planning- this act of orienting ourselves — to the moment, to the world, to our own selves — is perhaps the most elusive art of all, and our attempts to master it often leave us fumbling, frustrated, discombobulated. And yet therein lies our greatest capacity for growth and self-transcendence.

How do you go about finding that thing, that currently is without a present knowing  to you .

Basically, embracing uncertainty and doubt- Be patient toward all that is unsolved in your heart and to try to love the questions themselves like locked rooms and like books that are written in a very foreign tongue.

Don’t fight it: The word “lost” comes from the Old Norse los, meaning the disbanding of an army, and this origin suggests soldiers falling out of formation to go home, a truce with the wide world. I worry now that many people never disband their armies, never go beyond what they know. Advertising, alarmist news, technology, incessant busyness, and the design of public and private space conspire to make it so.

Do not now seek the answers, which cannot be given you because you would not be able to live them. And the point is, to live everything. Live the questions now. Perhaps you will then gradually, without noticing it, live along some distant day into the answer.

Scientists too, as J. Robert Oppenheimer once remarked, “live always at the ‘edge of mystery’ — the boundary of the unknown.” But they transform the unknown into the known, haul it in like fishermen; artists get you out into that dark sea.